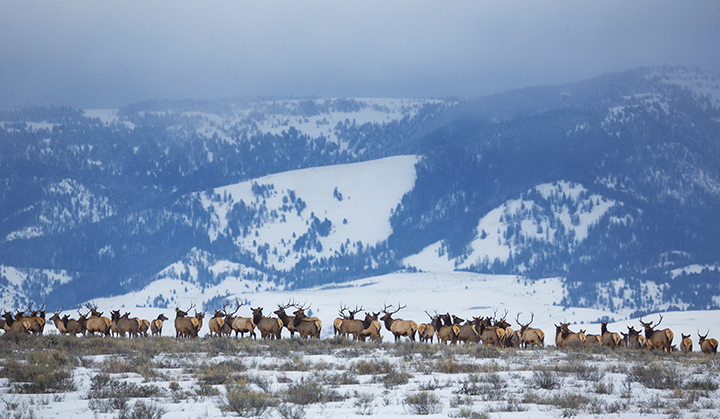 Wildlife needs room to roam – more room than one might think!

While we see different behavior from different species – migrating seasonally for food or searching for mates – animal movement teaches us two important lessons: 1) we must protect wide tracts of land that support this movement; and 2) we must effectively connect the land between those protected areas by improving coexistence between wildlife and people and reducing barriers to movement.

We and our many partners work on projects that support wildlife movement all year-round, with your help of course:

Watch the journeys of three amazing animals as they cross tribal, state, provincial and international borders.

Pluie (ploo-ee; French for ‘rain’) was the wolf that wowed researchers and animal-lovers alike. In 1991, this radio-collared female wolf journeyed more than 40,000 square-miles (100,000 square-kilometers) – fifteen times the size of Banff National Park and 10 times that of Yellowstone National Park!

During her travels, Pluie crossed more than 30 different political jurisdictions, going from near Alberta’s Banff National Park to Spokane, Washington, to the Bob Marshall Wilderness in Montana and back.

Pluie demonstrated how effective conservation must go beyond national, provincial and state borders and offer a way to reduce human-created barriers to movement.

Pluie’s story intertwines with Y2Y’s beginnings, and to this day, inspires the work we do for all wide-ranging wildlife. What Pluie showed researchers about animal movement set us on the path to connect and protect habitat from Yellowstone in the U.S. to Canada’s Yukon, so wildlife and people can thrive.

‘Ethyl’ the grizzly bear forges her own path

The female grizzly bear that travelled 2,800 miles (4,506 kilometers) had biologists in awe. Ethyl, the 20-year-old sow left her main digs in 2014 to make the move from Coeur d’Alene, Idaho, past Florence and Missoula in Montana, and eventually to Eureka near Glacier National Park – quite the distance, especially for a species that can end up in interactions with people or towns along the way.

Ethyl crossed interstate highways, major city boundaries, municipal landfills and residential backyards, and even spent part of this journey with her two-year-old cub.

Back-and-forth, up, down, around and through, some officials have even called her journey “bizarre.”

This female mule deer knows what it means to move. Not once, but twice, did mule deer 255 travel across a massive expanse of land from southern Wyoming to Idaho. I

n 2016, the doe travelled 250 miles (402 kilometers) and did it again in 2018 – while pregnant with twins! This long-distance trek taken from March to June was so impressive that researchers questioned if it was a fluke the first time around. Deer 255 is the record-holder for longest migration by a mule deer.

The migration route followed by mule deer 255 was discovered nearly 10 years ago; but normally, deer made their predictable stop to feast in the Teton Valley’s Hoback region. Deer 255 went the distance, finally landing in Island Park, Idaho.

“(Deer herds) are doing this elaborate highly choreographed dance on the landscape, and we can only see a tiny little part of it when they move through someplace where we happen to be observing them but we can’t imagine the entire migration until we get a collar on one of them,” Matt Kauffman, leader of the Wyoming Migration Initiative and the USGS Cooperative Fish and Wildlife Unit at the University of Wyoming, said at the time in a news article.

Questions remain about this deer’s famous journeys: Did she travel alone? How many other journeys are yet to be documented? Only time (and tracking) will tell…

After all, Wyoming is home to some of the largest mule deer herds in the West. Learn more about how mule deer doe 255’s route was tracked using a GPS collar from Wyoming Migration Initiative.

Thanks to your help, we can give wildlife the room it needs to roam.

Where is Yellowstone to Yukon?